Published by Sierra Monica P. on October 24, 2010 under Home 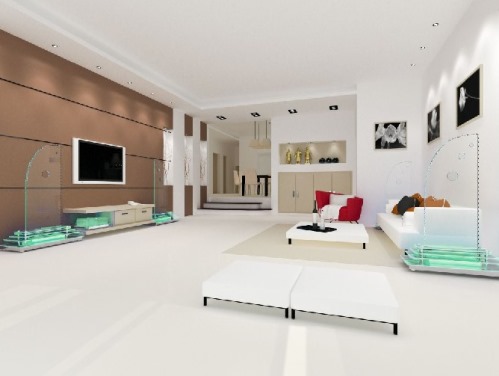 We wrote about these cool glass speakers last month and if you remember they were launched in September as the world’s first wireless, high-fidelity glass speakers featuring the GreenSound innovations. They enable 360-degree sound using sound projection through the glass and change the light color for each ambiance and mood. Specifications include 300Hz-15kHz frequency response, 25W output, 12V power input, 8 ohm impedance, 90.6dB, and a size of 21.5 x 43 x 65.5 inches at 246.18lb.

GreenSound Technology set a price of $33,000 for the Sempre speaker set with four Serac speakers and the Bravura subwoofer. 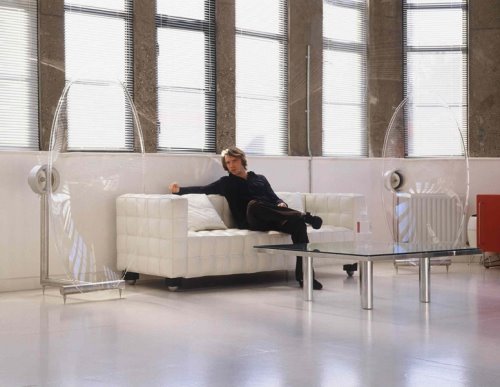 Ferguson Hill FHOO1 is not a new model. It was launched back in 2003 and is still in the top of preferences when it comes to high-end modern speakers. It was the world’s first front-loaded horn dipole loudspeaker and features 150Hz – 20KHz, Lowther DX3 full range driver, 8-mm toughened cast acrylic horns, 1M/1KHz/1 watt 100db sensitivity, 8ohm impedance and a size of 1.65 x 0.92 x 0.72 m at 27 Kg. 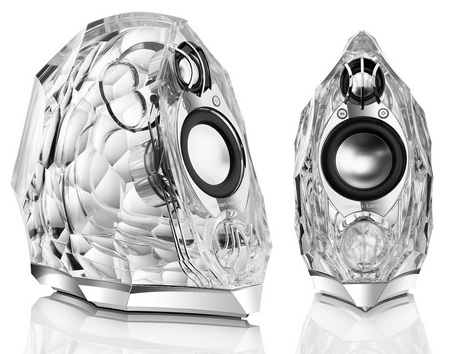 Harman Audio GLA-55 is made of bulletproof glass and is delivered as a high-performance 2.0-powered loudspeaker system. It combines art with high-end technology and is supported by all audio devices featuring analog output. You can find the music control easily and the LED lights on the front of the two speakers work as a status indicator.

The system is available at Amazon 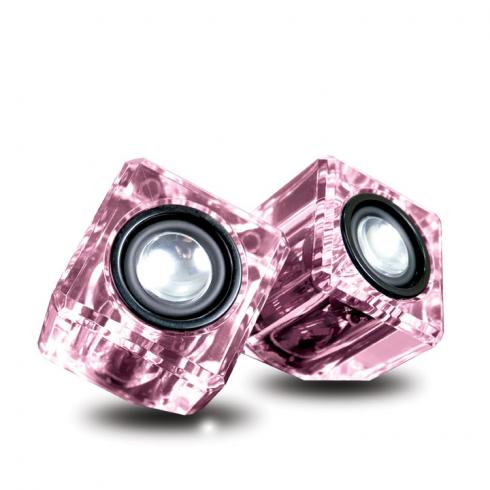 The Ice Crystal Clear Compact Speakers from i.Sound are two modern clear speakers coming in a small form factor so you can use them as desktop speakers. They are available in blue or pink and are compatible with iPhones, iPods and all the other media player devices featuring the standard 3.5-mm audio jack. In addition, the speakers have blue or pink illumination to make them even cooler in low-light environments and come with a Deluxe Travel Case and a 110/240 volt AC adapter.

These sell for $40 at Amazon 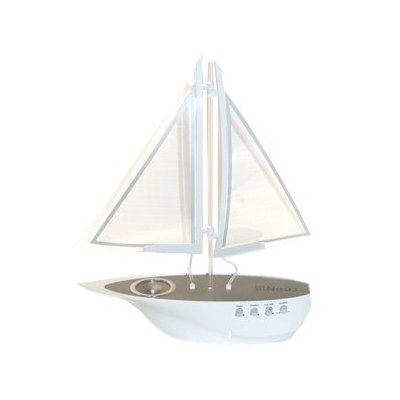 The yacht-shaped speaker here was developed by Fils using a piezoelectric film technology based on Poly Vinylidene Fluoride. The film is extremely thin and flexible, featuring low impedance, wide frequency and dynamic band, low density, high induced electricity and mechanism, and high sensitivity. Specifications include 170Hz-20Hz frequency response, 4.7 ohm at 1KHz impedance, 8 ohm for the subwoofer, 1Watt output for each speaker and 6.5W for the subwoofer and a size of 335 x 400 x 100 mm. It is presented on the official web site of the Korean company Fils and available for 68,000 Korean Won, or about $60. 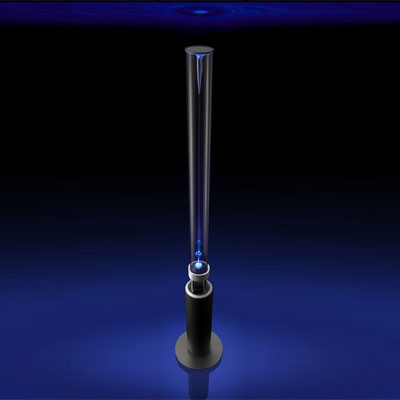 Sountina is a 2008 release from Sony characterized by omnidirectional sound and an organic glass tube tweeter. Also known as Sony Sountina NSA-PF1, the high-end glass speaker produces 360-degree sound while connected to your Blu-ray player, DVD player or other music-enabled device including portable media players. It also features internal illumination, 3-way system with organic glass tweeter, frequency response 50Hz-20kHz, 7cm midrange and 13cm bass driver, and remote control.
It was introduced in China at a retail price of $12,900. 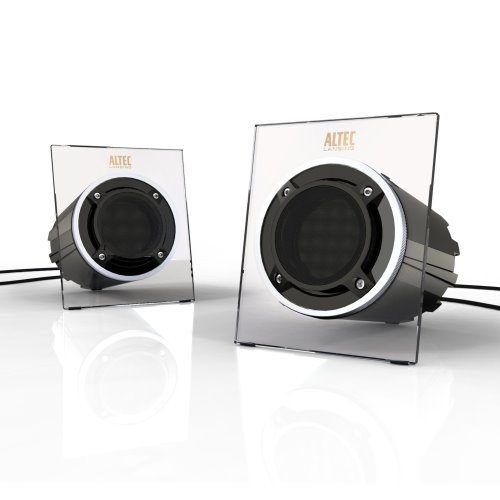 These small computer speakers feature cylindrical cabinets and 3-inch drivers. They come in a compact form factor with built-in controls and aux-in jack for connectivity with music sources. You can find them at Amazon 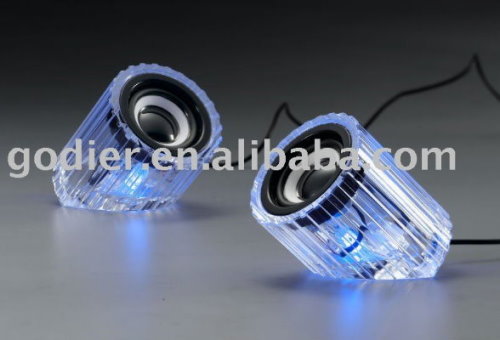 Godier usually creates unique Japanese time pieces, but this time it’s about a pair of transparent speakers called the Crystal Mini Speakers. You can use them with any laptop or portable media player device. They feature 1Wx2 output, frequency response of 45Hz-18KHz, S/N of 70dB, 4 ohm impedance and a size of 56 x 52 x 52 mm.

The transparent stereo speakers are available for less than $5 at Alibaba. 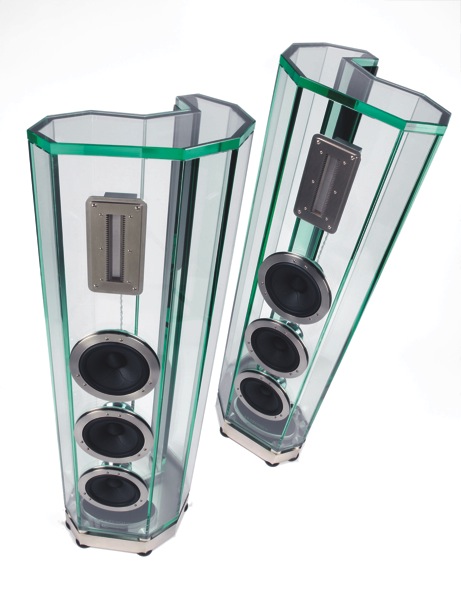 Last year we had a nice surprise from Crystal Cable when they launched the Arabesque loudspeakers. The system also was one of the Best of Innovations honorees for 2010 at CES 2010 and had a starting price of no less than $72,000. 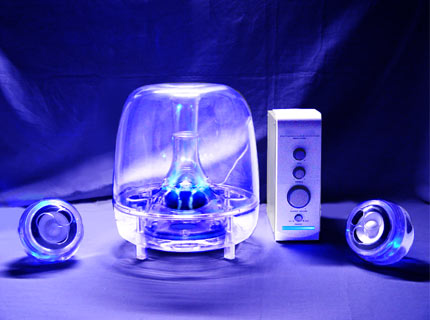 Logisys SP6006CL is a speaker system consisting of two speaker units, a subwoofer and an independent amplifier with controls. You can use the buttons on the front of the amplifier to set the bass, treble and master volume levels. The system can be connected to any music source and is also sound-activated, featuring blue LED lights. 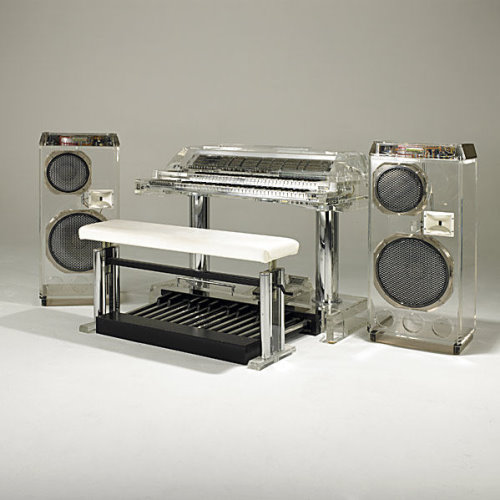 It looks modern, stylish and professional, so I guess you couldn’t easily believe it is a system showcased in 1980’s. It was created by Wersi and only two prototypes were introduced in the US. Also known as the Delta Digital DX500T Glas, the system sells now for $85,000 at 1stdibs. 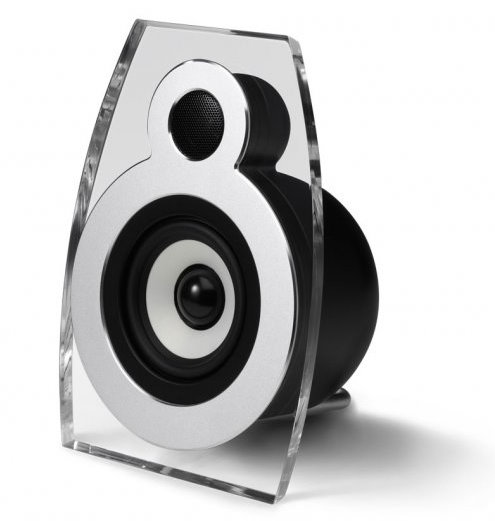 Bobo is an award-winning speaker with a funny name, created by Lars & Ivan. Bobo is a 2-way speaker system with the design inspired from wrist watches, featuring polished acrylic and aluminum elements.

You can find it at Amazon

These speakers feature three lighting patterns and 12 colors. They are compatible with any music-enabled device and also feature sound-reactive lighting and real-time beat recognition. You can purchase them for around $99 from Amazon